Local Innovation and Translated Technologies in the Making of a Cosmetics Empire, 1900–1940 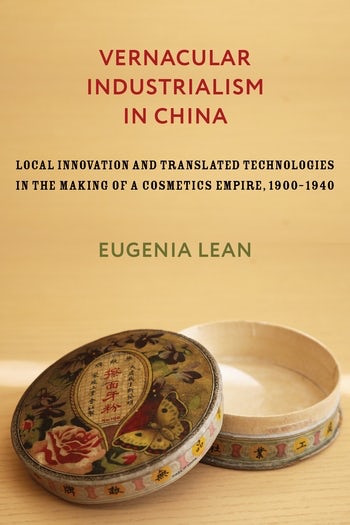 In early twentieth-century China, Chen Diexian (1879–1940) was a maverick entrepreneur—at once a prolific man of letters and captain of industry, a magazine editor and cosmetics magnate. He tinkered with chemistry in his private studio, used local cuttlefish to source magnesium carbonate, and published manufacturing tips in how-to columns. In a rapidly changing society, Chen copied foreign technologies and translated manufacturing processes from abroad to produce adaptations of global commodities that bested foreign brands. Engaging in the worlds of journalism, industry, and commerce, he drew on literati practices associated with late-imperial elites but deployed them in novel ways within a culture of educated tinkering that generated industrial innovation.

Through the lens of Chen’s career, Eugenia Lean explores how unlikely individuals devised unconventional, homegrown approaches to industry and science in early twentieth-century China. She contends that Chen’s activities exemplify “vernacular industrialism,” the pursuit of industry and science outside of conventional venues, often involving ad hoc forms of knowledge and material work. Lean shows how vernacular industrialists accessed worldwide circuits of law and science and experimented with local and global processes of manufacturing to navigate, innovate, and compete in global capitalism. In doing so, they presaged the approach that has helped fuel China’s economic ascent in the twenty-first century. Rather than conventional narratives that depict China as belatedly borrowing from Western technology, Vernacular Industrialism in China offers a new understanding of industrialization, going beyond material factors to show the central role of culture and knowledge production in technological and industrial change.

Eugenia Lean is a professor of history and East Asian languages and cultures and current director of the Weatherhead East Asian Institute at Columbia University. She is the author of Public Passions: The Trial of Shi Jianqiao and the Rise of Popular Sympathy in Republican China (2007).